During this expanded edition of the Mars Attacks Podcast we bring you an extra special interview with none other than John Bush, the legendary lead singer of Armored Saint, and ex-lead singer of Anthrax. We obviously discuss his years in Armored Saint, their latest album La Raza, his tenure in Anthrax, almost joining Metallica, and how Armored Saint has been mentioned incorrectly during Metallica’s documentary Some Kind Of Monster, and Motley Crue’s The Dirt.

Here is a complete list of items that we touch upon:

During the course of the episode you will also hear tracks from throughout John’s career. Songs off of not only La Raza, but Revelations, Symbol of Salvation, and a re-worked version of the classic track March Of The Saint. You will also hear some Anthrax, and tracks that he collaborated with Peter from Soilwork, and Six Feet Under. 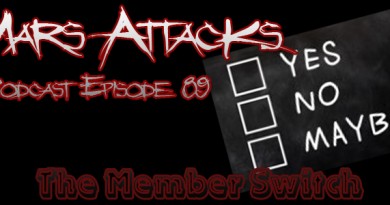 April 18, 2014 marsaries Comments Off on Podcast Episode 89 – The Member Switch

May 14, 2015 marsaries Comments Off on Videos – Brides Of Destruction – I Don’t Care