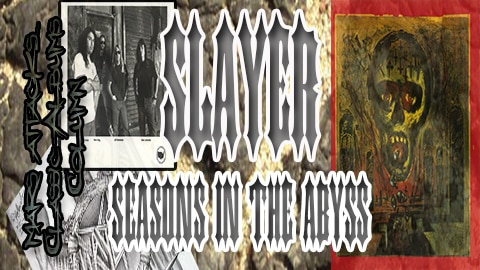 This month’s Classic Albums Column focuses on Slayer‘s Seasons In The Abyss. Mars Attacks Podcast episode 68 features comments from Gene Hoglan, Alan Tecchio, Dave Reffett, Jon Leon and Giovani Durst of White Wizzard, author Martin Popoff, Mitch Lafon of Pure Gain Audio, Andrew from Metal Assault, and Roch from Radioactive Metal. As we established with the previous podcast we also discuss why this album was selected. You will find the podcast at the bottom of this post.

Here are the written comments that were submitted:

Dan Lorenzo – Well I’ve been awake for 25 straight hours as I just flew home from Italy. So let me throw on some Slayer so I can stay awake a bit longer. Slayer to me, are one of the most consistent bands with the most integrity. I would put South of Heaven and Reigning Blood at the top of their output, but I am listening to Seasons right now for you Victor. War Ensemble is classic Slayer, particularly the break at 2:35. Blood Red is bad ass. The opening of Dead Skin Mask is pure evil. The title track is probably the 2nd coolest intro they ever wrote. When I first heard it I actually thought it was Trouble! Great production, great performances, a bit more melody/singing from Tom than previously, but another classic by….SLAYER!!!

Jon Leon – The finest hour of Slayer in the charts. Rick Rubin and the band dumbed down the sound JUST enough to crack Slayer in the Billboard top 100. Slayers best will always be Reign in Blood though….seriously. Show no Mercy also pisses on this album. So does South of Heaven. Then again…only Master of Puppets can even hang with those 3. Slayer are THE masters of thrash PERIOD.

Mitts – An improvement in the thrash department from South Of Heaven. After Reign In Blood, South Of Heaven seemed like someone pulled the emergency brake. Seasons brought back the pace.

Scott Middleton – Most people will hail Reign in Blood as Slayer’s best record, but I had Seasons first, and really, this has all the best songs. The title track is certainly the catchiest and most hook laden Slayer has ever been. This is the Slayer sound perfected. Evil melody, brutally heavy, frightening lyrics, and terrifying artwork make this the quintessential Slayer record.
Waaaaaaaaaaaaar!!!

JL – Slayer have always been the exception. They have a lot of what I hate in other bands and yet how they present it they make it undeniably attractive. This album is a demonstration of full-fledged fierceness, from the very beginning “War Ensemble” it is clear exactly what you’re getting yourself into.

Fer Fakyea – Well, what to say about the legendary Slayer? Their career spans nearly 30 years and with 10 albums behind him, all heavy and known for their uniquely characteristic “speed metal”. Seasons In The Abyss is composed of long, elaborate songs, combining speed with half time playing, that helped drive the band to the monster career they are today. The album isn’t as fast its two predecessors, but it’s definitely a very complete and extreme album that brought us classics like “War Ensemble”, “Dead Skin Mask” or one of his most emblematic yet perhaps less know tracks due to how stylistically different it is, would be the title track, “Seasons In The Abyss”. I honestly would not recommend the disc to someone who had never listened to Slayer, but it is an album that any fan of the band should have in collection.

David Lozano – Dead Skin Mask is the first song I ever heard by the band, as a result I have special attachment to this album. Great album that came out during such hard times.

Chris Shrum – A piece of metal art from a deep, dark place.

Mikey Pannone – The first time I heard this album, I had to check my skull to make sure it was still intact…it wasn’t. That’s all I have to say. None more evil than the almighty SLAYER!

Sean Bryant – So evil!! there were a few tapes that I had in my VW bug and those were Slayer, Seasons, Led Zeppelin Houses of the Holy, and probably Lenny Kravits Let Love Rule, all of which got significant amount of play time. I can say that when Seasons came out, I was certain that they were products of an under-worldly creation, especially when you heard the demonic chords of the title track and that first drum roll. My steering wheel was certainly abused by the pounding out of the drums while blasting this, windows down, rolling through the Mormon neighborhoods. 666!!

Will Carroll – I never understood the popularity of this album. Aside from the two video songs (War Ensamble, Seasons In The Abyss) its pretty generic. The follow up (Divine Intervention) blows doors over this one This is my least favorite Slayer album not counting anything after Divine..

Steve Smyth – Slayer really grew into something with this album, I think. Lots of powerful compositions, great ensemble playing from the team of Kerry King and Jeff Hanneman, Dave Lombardo and Tom Araya. Every song is a favorite of mine, I can’t pick favorites when it comes to Slayer! Ha ha!

David Ellefson – We did a lot of touring together during this time period and I personally liked that Slayer was doing more than just playing fast. To me, this album showed a lot of maturity in their song writing and broadened their scope of world views, which Thrash fans love.

Domonic Rini – Seasons In The Abyss is a natural progression for Slayer. This one really, in my eyes was one of the heaviest ones they put out. With tracks of “Skeletons of Society” and the title Track “Seasons In The Abyss” it made you want to break something whenever you heard it.

Niek – I love this album for only one reason: the title track! What a delicious piece of ass! For a band that spent 99.9% of its career on making lightning-fast but not all too intelligent Thrash, the song Seasons in the Abyss is an absolute masterpiece. And it would have been for any other band too. The long-stretched tension-building intro has a habit of making me very impatient, in particular because I know what’s coming. But never is what’s coming so amazing as when you’ve listened to the intro in full. When the main riffs breaks loose, there’s no helping the headbanging. The progression of chords and vocals in the chorus is tasty as bacon. But the best things in the whole songs are the heroic drum fills by Dave Lombardo and the characteristic tearing-up-the-sky guitar solo by Kerry King (still with hair) and Jeff Hanneman.

Jason Bittner – Just spent the last 5 1/2 weeks on tour with Slayer watching them every night…Still one of my favorite bands ever and they still crush every night! Seasons- not much need to be said about this album- its my favorite!!! Well maybe “Reign” is, but this is damn close!

Davish G. Alvarez – This is my favorite Slayer album, we’ve been talking about covering the title track live. The song is unbelievable, and is possibly my favorite by the band. When this album came out I was listening to a lot of Mercyful Fate, I was looking to discover something new, and you hear that song how it builds, little by little, how the arpeggios come in, and the song keeps building, to me it’s the perfect song. They were playing the song live while we were opening up for them, and I watch them do the song, and get almost like a holy shit type feeling. You see them play the song, and the guitar parts aren’t that complex, but it’s the entire composition, the whole package, how it builds, and changes, and then the end, just an awesome song.

Erun Dagoth – This album really blew my mind. When I started listening to extreme metal I started with Life And Death and Show No Mercy by Slayer. I started listening to them in like 91, so by that time they had release a bunch of albums by then. I started listening to every album Show No Mercy, Hell Awaits, all the way up to this album, and again, it just blew my mind. The album has a certain feel to it, a certain atmosphere that sound super satanic, especially the title track. At the same time I started discovering bands like Venom, and Bathory, and things of this nature, and it was like a extreme metal boom time for me. Then they put out Diabolus In Musica and it was the last album of theirs that really blew my mind. After that, things just weren’t the same, the band had changed. And a lot of people had criticized them over Divine Intervention because they had slowed down a little, but it still sounded really cool to me, it still had the same appeal.

Keith “Keefy” Chachkes – When the bands from the 80s Thrash scene era continued releasing albums into the 90s, and interesting split occurred among people. Many bands tried to shift with the already changing times in music to get further away from labels like Thrash or Speed Metal. Other bands were changing more naturally on their own, modernizing the sound of what had been a sub-genre with a growing cult following and making it more successful overall. SLAYER’s Seasons In The Abyss set a bench mark for the old-school American bands, which is saying a lot since both MEGADETH and ANTHRAX released great albums in the months prior to its release. Yes, there were unhappy fans griping that the totality of “Speed Metal” days of the band were lost to the past. Critics and fans that didn’t like South of Heaven, didn’t say they loved SITA when it was new. People were finding fault with a more grown up, better songwriting band that was trying to stay true to who they were and still progress further out. As it turns out SITA is one of the most complete and solid of the DAVE LOMBARDO albums, with better production, memorable riffs, sick solos and batshit insane, yet smart lyrics. “Dead Skin Mask” was even said to be a sellout by some at the time, but is one of the most enduring cuts by any band of the time. “War Ensemble” was a throwback to the early days of the group. Other tracks like “Spirit In Black”, “Expendable Youth” and “Skeletons of Society” have so much balls and groove to them, it’s tough to believe people at the time said they were lame. The title track is a masterpiece all on its own. Personally, I count SITA as one of the top four SLAYER albums ever and it still sounds fresh and vital to me today as when I first heard it.

Bruce Moore – I am a huge fan of Slayer especially their earlier material like Show No Mercy and Hell Awaits. Seasons In The Abyss is a mixed bag for me while it contains some of my favorite all time Slayer tunes War Ensemble”, “Dead Skin Mask”, and “Seasons In The Abyss other songs just fell flat for me and did not get my blood flowing.