If you’ve listened to my podcast Mars Attacks, or read my previous reviews on this site, you’ll know that I’m a huge fan of Monte Pittman, and his Metal Blade solo releases, as well as his work with Madonna.

He just did a bunch of shows with former Slayer Drummer Jon Dette and Eli Santana of Holy Grail, Huntress, and Alien Satan fame.  Monte will be going out with the legendary Tony MacAlpine, here is the information sent to us about the tour:

Starting January 27th, Monte Pittman will head out on the road as direct support to Tony MacAlpine, with special guest Lonero. Monte Pittman comments: “I’m excited and honored to hit the road opening for Tony MacAlpine. We’re playing some of the cities I recently played while opening for Sebastian Bach earlier in the fall, so I’m really looking forward to getting back there. This is going to be a great way to start the year.” 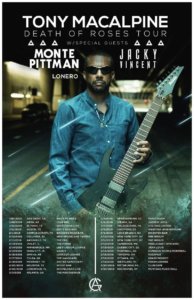 See below for all dates!

Monte Pittman will be touring in support of his two new solo albums: Better Or Worse and Between The Space. Monte comments:
“The album ‘Between The Space‘ is a heavy album that gets straight to the point as soon as it starts. The theme is about connection, alignment, and what divides those things. As always when I write, my goal is coming up with the material that fits in my live show. I did everything on these albums. I wrote it all, I played every instrument, I recorded it, and I mixed it. The only thing I didn‘t do was the artwork (by Aaron Lea) and mastering (by Alan Douches). It was a challenge having so many tasks. It was a luxury being able to take the time and get everything just how I wanted it. It was a learning experience, and it was a lot of fun making it. The album ‘Better Or Worse‘ is an acoustic album but it feels like a heavy album. The theme is about being attached to something or being unattached. It could be an idea or a thought process. The softest part of the album has the heaviest lyrics. It builds instrumentally as the album progresses. I wanted the tone of each track to be a little different from each other. ‘Better Or Worse‘ and ‘Between The Space‘ both mirror each other and they are polar opposites. The idea is to have something there for the people who like my heavy music, something for the people who like my acoustic music, and something for the people who like the variety of both.”