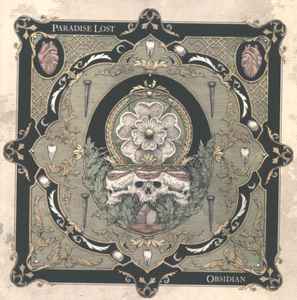 This band has always evolved. Whether it’s focusing on doom, gothic or industrial aspects of hard and metal. They have never been content with sitting still, and resting on their laurels. The first thing I ever heard by the band was 1997’s One Second. This was a full on industrial hard rock album, with aspects of gothic and doom influences mixed in. It didn’t sound like doom at all. But, it was as if they where trying to inject doom into other forms of music that hadn’t felt it before.

The band has been around for over three decades. Obsidian is their sixteenth studio album. It expands upon what a lot of fans of the band deem as their return to form. Their last two albums, The Plague Within, and Medusa, have been heralded by fans and critics alike. The album has the heaviness of the last two albums, and mixes in what the band deems as a Sisters Of Mercy influence. It is only on a few tracks that a lot of the critics are pointing out. It isn’t going so far in the direction of One Second or Host. It is but a small reminder by the band that they aren’t a one trick pony. They’ve shown their fans that it’s safe to come out and play. It is also a subtle reminder they don’t shun other influences or their past.

OBSIDIAN IS THE 16TH STUDIO ALBUM BY PARADISE LOST

So while their giving their fans what most of them have come to love by the band. They’re also adding flavors that could make people revisit albums they panned in the past. Possibly seeing them in a different light.

They have a die hard following that will love Obsidian.

The self-titled album by Firewind, will mark the ninth studio album by the band. It is unfortunate that some fickle music fans will only see him as the guy that played on that one Ozzy album (Scream). He’s actually one of the most prolific guitarist of the last two decades.  He has released studio or live albums by Firewind, solo as Gus G., Dream Evil, Mystic Prophecy, and Nightrage. He’s played on the Ozzy album or guest appeared on more than 25 releases since the turn of the century.   As far as I can tell, he didn’t released anything in 2016 or 2019. Not to say he wasn’t busy, but they are the only two years where he didn’t play on anything that came out.

RELATED: FIREWIND DEBUTS VIDEO FOR “WELCOME TO THE EMPIRE”

Firewind marks the debut of Herbie Langhans as lead singer of the band. He is best known for his work with bands like Avantasia, Rhapsody Of Fire, Mob Rules and Kamelot.

When I posted the video for “Welcome To The Empire on Talking Metal’s Patreon, people had a mixed reaction. Most seemed to love the music, but were not convinced with the vocals. Join us there to share your opinion.

The band from North Yorkshire has been one of the hottest commodities on the hard rock and metal scene. This all started on their first album, 2009’s Stand Up And Scream. They’ve had three top 9 albums, one of those going to number 5. 2017’s self-titled album saw the return of original lead singer Danny Worsnop. He had worked in various projects outside of the band, and in various styles of rock based music. This was ever present when he returned to the band as they took more of a modern hard rock approach to their music.

THE BAND HAS SCORED FOUR CONSECUTIVE TOP 30 ALBUMS IN THE U.S. ONE IN TOP 5

This album continues that trajectory. It takes on more of a melodic approach, and pushes the envelope further. That will piss off long time fans of their earlier work, but it doesn’t seam the band cares about that. The band has always kind of done what they wanted. Whether that’s been clear or not in their music, off stage they’ve always had this no fucks given attitude. These last two albums show they appreciate their fans. But, they have no issues if some of them don’t want to come along for the ride. They’re blazing their own path. If you’re with them cool, if not, well then their fuck off attitude shines through.

Shrapnel – Palace For The Insane

HERE ARE THIS WEEK’S REISSUES

Babymetal – Live At The Forum Blu-ray/DVD