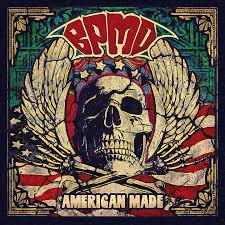 For the months we had heard rumblings of a nameless new super group. We’ve seen pictures Overkill’s Bobby Blitz Ellsworth, Winery Dogs/Sons Of Apollo ex-Dream Theater drummer Mike Portnoy, Metal Allegiance bassist Mike Menghi, and Vio-lence ex-Machine Head guitarist Phil Demmel together in various photographs. And people have been wondering since, what exactly is going on? So BPMD, Blitz, Portnoy, Menghi and Demmel are BPMD. Their album American Made drops today.

This album is essentially a covers album. The title comes from the fact that these are all tracks that where originally released by American artists. Most people will recognize the majority of the tracks they’ve recorded, and will also appreciate each components signature sound. It pays tribute to the forefathers of American hard rock and metal, while also putting enough of a spin on the music to make it modern, and as alluded to above, sound like each member of the band.

For as much crap as I give Frontiers for some of their projects, they’ve been doing an outstanding job in releasing music by newer bands like Electric Mob. Today specifically they’re releasing several albums that have caught my attention instantly. Both of these albums, have ridiculous voices on them, here you have Renan Zonta from Brazil. While further down the post I’ll discuss the Finish band Smackbound.

Electric Mob have the perfect name, and the album title Discharge, suits it exceptionally well. Look they aren’t inventing anything new here, but the album is exciting, and entertaining. Something that is missed in most rock based music these days. A few weeks back I posted the video for the band’s track “Upside Down” on Talking Metal’s Patreon. The track and its video received rave reviews by everyone that commented on it. This is the perfect album to check out for anyone that insists that rock is dead, or as many have said to me in the past “nothing good has come out after 89”. This is a great exciting new band for those looking to get turned onto something new.

I recently posted about Smackbound here on Talking Rock. The band was formed back in 2015 by the ultra talented Netta Laurenne. She is a powerhouse, and has previously lent her vocal talents to bands like Amorphis, Lordi, Black Sun, and Elvenking to name a few. She a classically trained singer that has also dabbled in pop, jazz and folk singing. She’s also an actress, appearing as Venla Korhonen in the Netflix series Bordertown. She also plays Nini Korhonen on the Finish series Hotel Swan Helsinki.

The band is rounded out by Teemu Mäntysaari of Wintersun on guitar. Rolf Pilve from Stratovarius on drums. VIli Itäpelto and Tuomas Yli-Jaskari from Tracedawn respectively on keys and bass. Take a ride down YouTube rabbit hole, and see the band flawlessly covering Dio’s “Don’t Talk To Strangers“, Deep Purple’s “Burn“, Whitesnake’s “Still Of The Night” and Yngwie Malmsteen’s “I’ll See The Light Tonight“. They are no slouches to say the least.

RELATED: SMACKBOUND “THOSE WHO BURN” VIDEO

What drew me to the band is Netta’s voice. Let’s be honest, there are a lot of beautiful singers in hard rock and metal nowadays. It’s a lot harder to find someone with her vocal talent, than someone that’s as aesthetically pleasing. It reminds me of hearing a pop singer with killer pipes and think “wow, I wish she’d release a hard rock or metal album.” I’ve thought this a ton of times, but it never happens. Netta is doing just this, and I’m thrilled. As mentioned above with Electric Mob, this is the kind of release that I want from Frontiers. A relatively fresh band, that is very talented, whose album entertains me top to bottom. Again, no good new music? Take 20/20 for a spin, and let me know if you still have that opinion.

Magnus Karlsson’s Free Fall – We Are The Night

Magnus is best known for his work with Primal Fear, and being one of the go to guys on Frontiers Records. His credits are all over the label’s releases. The Ferrymen is my favorite of project that he’s worked on for them. This is the third release under the Magnus Karlsson’s Free Fall moniker. His first since 2015’s Kingdom Of Rock. We Are The Night has a rotating lineup of lead singers, including former Black Sabbath lead singer Tony Martin, and another powerhouse from Finland, Noora Louhimo of Battle Beast, Electric Mob’s Renan Zonta, Dino Jelusick of Animal Drive, his The Ferryman band mate, and Rainbow lead singer Ronnie Romero. Not too shabby to say the least.

The album full of what I’ve come to appreciate about Magnus as a player and composer. On the album he cuts loose and shows what an explosive player he can be. There are times where he reminds me of John Sykes. Especially when it comes to some of the more technical playing. Although I may not appreciate some of the other projects he works on. I get it, and understand why he’s on call for the label. At the end of the day, he’s trying to do the best for those project, and you can’t fault him for trying to heat his pool.

What is there to say about Michael Angelo Batio that hasn’t been said before. If you’re a fan, you know what you’re getting. This is obviously a must have for anyone that’s a fan. A new fan? Well, he’s one of the most prolific instrumental guitarists that focuses mainly on metal. He’s never been ashamed to play this style of music, while others have shied away, he’s welcomed it. You might have seen him with his four string, and think it’s a gimmick, but Michael Angelo Batio can shred on one, two or four necks without an issue. Check the album out if you just want some unadulterated shredding.

Aversions Crown – Hell Will Come For Us All