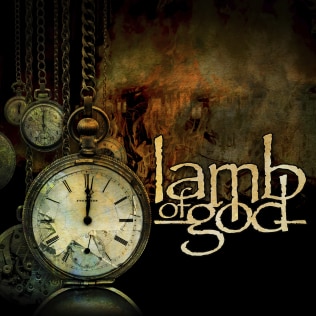 The long awaited new album by Richmond, Virginia’s Lamb Of God. Say what you want about the band, but they are currently, and have been for the better part of the last decade one of the biggest bands in metal. You may not like them, you may not appreciate their accomplishments, but you should respect them for what they have done for the genre. They picked up a baton that was dropped by a band like Pantera, and charged forward.

Along with their popularity, comes more detractors as well. Like I mentioned in a recent post about Lars Ulrich, the bigger the fire, the more flies you attract. It unfortunately comes with the territory, and people love to tear bands down once a band has reached a certain level of success.

This is the band’s eighth album, their first with new drummer Art Cruz. He’s best known for his work with Winds Of Plague and Prong. He is by no means a slouch, and brings his own set of tools to the table. It isn’t as if he’s changed the band with his playing, there is just a slightly different feel to what he does. When the argument comes up “who’s the better drummer”, it’s usually brought up by people that have never picked up a pair of sticks.

No two drummers are a like, at least, that’s how it used to be. With things getting more mechanical, a lot of the feeling is thrown out the window for the sake of having a metronome in place. Fans of Chris Adler will belly ache about the album. But Cruz isn’t a ham and egger by any stretch of the imagination. He more than picks up his end of the slack on the album.

Like I alluded to above, with so much popularity, you’re going to attract a lot of garbage. Is the band doing anything new here? No, I think die-hards will want to get their hands on this album. Although some freaked  out with the track “The Duke” a few years back. Lead singer Randy Blythe has done a good job at mixing things up on the album with his vocals. You also have guest vocals by Hatebreed’s Jamey Jasta, and Testament’s Chuck Billy on the album. Art Cruz may not fill in every imaginable space like Chris Adler did in the past, but he puts his stamp on things. Working within what the band does, putting his spin on things.

As for Will Adler, Mark Morton, and John Campbell? As the Talking Heads once said, “same as it ever was”. Is it As The Palaces Burn or Ashes Of The Wake? No, for a lot of people it won’t be, it can’t compete with the emotional connection fans have to those landmark albums. But if you love what they do, and listen this with an open mind, you’ll probably love this album as well. If you don’t get what they do, then you probably won’t get this album either.

Check out the video for “Memento Mori” off of the new self-titled album by Lamb Of God here:

This is the Cleveland band’s eighth album. It is their first with new lead singer Jackie LaPonza, A.K.A. Ms. Jackie. She has toured with the band for several years, but this is the first time they put her voice on a full album. The band has always had a revolving lineup that’s featured several lead singers in the band at the same time. So unless having a female voice in the band shocks you, nothing else about this transition should honestly come as a surprise to anyone.

What also shouldn’t surprise anyone is this band’s music. Much like Lamb Of God, you either get it or you don’t. If you’re still hung up on the masks, or theatrical approach, then you might as well move along. The band does what they’ve been known for doing for close to three decades. As much as they’ve been compared to Slipknot, or feuded with them, their music sounds nothing a like.

Even with the inclusion of Ms. Jackie, the band really isn’t steering that far off course from what they’re known to do. No reinventing the wheel, and for better or for worse, it is purely a Mushroomhead album for 2020.

Check out the video for the Mushroomhead track “Seen It All” off of A Wonderful Life here:

The Canadian band is one of the forerunners, pioneers if you will of modern progressive metal. Way back when Mike Portnoy picked them to open for Dream Theater, fans of said band went ape-shit. To them prog metal was Dream Theater, and the detuned, syncopated rhythms of Protest The Hero were so far from they were accustomed to. To Portnoy’s credit, he was ahead of the game, as Protest The Hero changed the game. They ushered in a new era of this form of metal. And yes, Dream Theater themselves where keen to take aspects of what this and what other younger bands where doing, and incorporate it into their repertoire.

In any event, this is Protest The Hero’s first album in seven years. There had been a huge question mark looming over them after the band had to cancel a tour midstream. Their lead singer, Rody Walker had suffered a vocal injury that threatened to end his career. As a result, fans have been eagerly waiting to see what the band would do. Would they change their sound to accommodate Walker? What did he sound like? Could he still pull it off. Much to the delight of fans, he sounds more or less the same.

The band is back, and back to what they do best. Take their blue print for modern prog metal, and push, push and push. They experiment, and absorb other aspects of metal that they’ve never kind of touched upon directly in the past. But make it all work under what they do. They’ve pulled off what few bands can do and that’s take an extended break and deliver some of their best work to date. While most bands would just try and run out the clock, or their contract, this band has done the opposite. Protest The Hero has raged back to show that there is no reclaiming of any thrown necessary, it was theirs the entire time.

Check out the video for “From The Sky” off of Palimpsest by Protest The Hero here:

Beyond The Black – Horizons

Cro-Mags – In The Beginning EP

For as much crap as bands like Kiss and Judas Priest get for label released greatest hits packages, fans of Iron Maiden seem to forget about them releasing their entire catalogue over and over again. I love Maiden, they and Kiss are my all time favorite bands. But it bugs me that over the years they point finger at other bands, while they have no issue with the endless stream of cash grab reissues. This time around they’re bundling together Live After Death and Rock In Rio. Both can be purchased on their own as well, and there is a limited collectors box edition of Live After Death with an Eddie statue and patch. If you’re a collector, cool, you’ll probably pick this up, regardless of the fact that you have the original CD version that doesn’t have side four from the Hammersmith Odeon, or the full version of “Running Free”. And you probably have at least one of the many re-releases that have come out over the years.

Check out the live video for the Iron Maiden track “Hallowed Be Thy Name” off of Live After Death here:

Look, both releases are great, I’ve listen to both of them a million times. They capture a series of shows from Long Beach California, London and Brazil that demonstrate just how great they are live. I actually own everything the band has released. Maybe not every version, and I get it, the market is there, so why not take advantage? But these CDs are the same remasters they released a few years back on iTunes. And it still kills me that they’ve released remastered versions of their entire catalogue, including The Book Of Souls. Because you know, in 2016 the album wasn’t mixed or mastered correctly. If that isn’t a cash grab, I don’t know what is.

Anything released in the last 10 to 20 years by a band like Maiden shouldn’t have to be remixed. They’ve always been great sonically, it isn’t as if they’re Priest, and released some crappy sounding albums. Which you could argue need to be remastered.