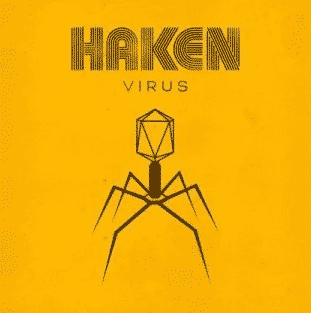 Haken is arguably the biggest prog metal band out of the UK. I personally had never heard of them, until a die-hard local artist/producer scolded me for being ignorant to their existence. He went on to call me out for only being familiar (at the time) with Dream Theater when it came to this sub-genre of music. Their keyboardist Diego Tejeida had actually guested on one of his band’s recent releases. This made me investigate the band more, and realize what a dedicated following they actually had.

This is the band’s sixth full-length album, it is a continuation of the band 2018’s release Vector. The breadcrumbs for Virus where laid out during the recording of that aforementioned album. So a lot of the ideas began to take shape two years ago. The album’s title has nothing to do with COVID19, as they planned to use it way back when.

VIRUS IS ALBUM NUMBER SIX FOR THE U.K. BAND

What stands out to me with this album is its stark contrasts, they bring the heaviness they’re known for. But Virus is a very dynamic album, filled with contrasts to that heaviness. Often times that’s provided by lead singer Ross Jennings voice, other times it’s musical intricacies the band has presented on the album. They’re always compared to Dream Theater. But, what prog metal band isn’t? If you sit back and really dissect what they’re doing, the band tunes down, and uses seven strings to their advantage. Sure Petrucci and company have done this in the past. But Haken’s musical structure is closer to Devin Townsend or Periphery. No wonder they have enlisted Adam “Nolly” Getgood to work on the album, he’s probably best known for working with both bands in the past.

The “Messiah Complex” off of Virus is being labeled their “Metropolis”. Fans and critics alike are pointing to the five tracks that make up the “Messiah Complex” as possibly the best thing the band has ever released. This album is a must have for die-hard (as if there was any doubt), or anyone looking to get into the band.

The Sword – Conquest Of Kingdoms

I was elated to find out that The Sword had returned after a two year hiatus.  I interviewed their guitarist Kyle Shutt a while back for my Mars Attacks Podcast.  The band often gets pegged as being just a stoner band.  But if you listen to their albums from top to bottom you’ll know that isn’t true at all.  Mixing keyboard elements that are closer to Pink Floyd.  Or acoustic renditions of tracks that harder edged bands would shy away from.  They are releasing these two new compilations, Conquest Of Kingdoms and Chronology 2006-2018. The former will be a three disc vinyl and digital release. While the latter will be a three disc CD release.

Conquest of Kingdoms, an explosive three-disc vinyl collection of rarities and oddities, offers 30 tracks (16 previously unreleased) and is housed in a triple-gatefold package, including B-sides, oddities and live recordings of fan favorites like “Freya,” “Iron Swan” and “Fire Lances of the Ancient Hyperzephyrians,” as well as cover versions of “Immigrant Song” (Led Zeppelin), “Nasty Dogs and Funky Kings” (ZZ Top), “She” (KISS), “Forever My Queen” (Pentagram) and more. A truncated digital version will also be available. In addition to the standard vinyl release, a limited-edition color variant (1,000 pressings worldwide).

RELATED: THE SWORD RELEASE A VIDEO FOR THEIR COVER OF THE KISS CLASSIC “SHE”

Chronology 2006–2018 is a three-disc CD compendium, which — in addition to the aforementioned rarities — also includes The Sword’s greatest hits and fan favorites. Distilling the band’s complete discography, this collection comprises 52 tracks (12 previously unreleased), including the studio recordings of “Freya,” “Iron Swan,” “Cloak of Feathers” and “Deadly Nightshade.” The set also features expansive new liner notes with contributions from the band, plus Lars Ulrich (Metallica), Mark Morton (Lamb of God) and Neil Fallon (Clutch).

Powerwolf – Best Of The Blessed