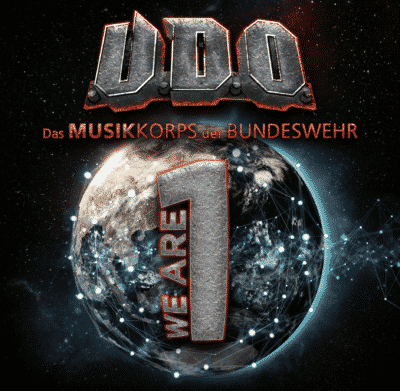 The legendary Udo Dirkschneider and his band U.D.O. are back with a very interesting set of collaboration. First off the album features the official Concert Band Of the German Armed Forces. The Musikkorps der Bundeswehr, which is lead by Lieutenant Colonel Christoph Scheibling. Secondly, it sees Udo collaborating with Peter Baltes and Stefan Kaufmann for the first time in years. Udo and his son Sven have said that the latter does not signal a return working with either artist permanently, or with Accept for that matter. He has gone out of his way to say that he’s happy with the U.D.O. band.

This album is very interesting is that as much as the orchestra is there, as well as U.D.O. there is really a give and take throughout. Usually the orchestration slightly compliments a band, or it’s a huge clusterfuck where both are fighting one another for your attention. For example Metallica’s S&M. But in this case, both are working in unison to bolster one another. It is a very interesting, and bold mix that will catch some off guard. But if listened to with an open mind may actually be pleasing to the listener.

This isn’t what you’ve come to expect from U.D.O., especially given how strong the last few albums have been. It is definitely something that is outside of Udo’s wheelhouse. But I do think it is a worthy listen for any fan of his work as a solo artist or with Accept.

Check out the video for the UDO track “We Are One” here:

The return of the most loved/hated band! Let’s be honest, there are very few people that are in the middle when it comes to this band. They’ve had a ton of radio play over the years, and that’s lead to a lot of people’s hatred towards the band. They have always been bigger in the U.S. than in the U.K. Although Gavin Rossdale did appear on the British version of The Voice, they have for the most part been looked down upon by Brits as a retread of what was going on in Seattle in the 90s.

The band rose to popularity when bands like Oasis, Blur, The Verve, Suede, and the like ruled the charts. Add huge American bands like Nirvana and Pearl Jam the mix, and there was little room for Bush. So as popular as they may have become, the critics always looked down upon them in their home country.

Just look at this example, Louder, who owns both Metal Hammer and Classic Rock magazines, gave two very different reviews of The Kingdom. One called them a third-tier grunge band. While the other applauds them for being better than most of the bands that were trying to play the same type of music in the mid-90s.

Rossdale had been promising for some time that this album would be their heaviest of the last few years. Given that he’s had Chris Traynor in the band from some time now, it’s always seemed like a lost opportunity to me. He was part of Helmet and Orange 9mm, two bands that are considerably heavier than Bush.

This time, he seems to have finally let Traynor to do a little more of his thing. Although this album does contain some of the most introspective and soft ballads by the band. It also contains arguably the heaviest music that band has released in the last few decades. You won’t be mistaking this with any of Traynor’s hardcore past, but it’s closer to the band’s 90s output than what came after.

Like I’ve said time after time, the bigger the fire, the more bugs you attract. The more popular the band the more detractors you’ll find. If you’re a fan you’ll check this out, if you aren’t, you’ll probably keep hating them.

Check out the Bush track “Flowers On A Grave” here:

Pirate metal is something that has gained in popularity over the course of the last fifteen or so years. Bands like Alestorm, Swashbuckle, and going all the way back to the 80s Running Wild have helped pioneer and push the sub-genre forward. The theme of these bands lyrics is pretty obvious, treasure, plunder, drink, and the high seas. The music is a mix between hard rock, thrash, pagan, and folk music. Mixing Pirates Of The Caribbean themes with Oktoberfest like melodies and anthems.

Rumahoy formed back in 2011 in Auchtermuchty, Scotland. They deemed themselves the “World’s Best True Scottish Pirate Metal Band”. Which if you’re a fan of fellow Scots Alestorm, they say they’re the “World’s Second Best True Scottish Pirate Metal Band”. They obviously get along as Rumahoy’s lead singer Captain Yarrface guested on the recently released Curse Of The Crystal Coconut by Alestorm.

If you’re a fan of the genre, and need a chaser after Alestorm’s recently released Curse Of the Crystal Coconut, then this is the album for you.

Check out the video for the Rumahoy track “Harambe, The Pirate Gorilla” here:

Kansas – The Absence Of Presence

Dawn Of Ashes – The Antinomian