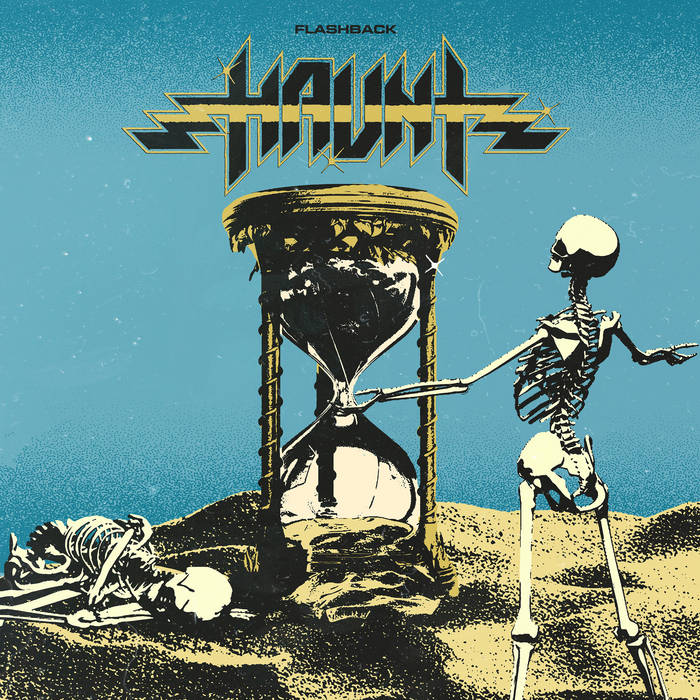 This band came on my radar a few years back. For my money, they’re leading the charge when it comes to newer bands that are mixing a lot of old school elements with modern production. Their music is a great mix of both. The title of the album is perfect. Aspects remind you of why you fell in love with bands like Iron Maiden, Y&T, Motley Crue, and at times even Metallica or Megadeth.

Some might say, “but there are a million bands already doing that”, right, but they’re not Haunt. They don’t present things in the same way, that at least for me grabs you right away. They mix the right amount of 80s hard rock, heavy metal, and thrash. As much as I ranted and raved about High Spirits a few years back, Haunt is like a heavier version of the hard rock band.

Flashback is the second album released by the band this year. Mindfreeze came out in January this year. What is this 1974 when bands often released two albums per year? This is currently a Bandcamp exclusive, with the physical version of the album will be released in a little more than a month on August 14th. If you’ve been in on the band, you’ll need this for your collection.

CHECK OUT ALL OF FLASHBACK BY HAUNT HERE:

The Japanese band Boris has never been afraid to experiment. They’ve released albums with various types of metal, including doom, sludge, stoner, hardcore or thrash. Albums with guest artists like Ian Astbury of The Cult, or Sunn 0))). As well as putting something way out there like a trip hop album.

They’ve never been scared to take on a genre of music, or address certain topics. When announcing the album, the band stated that this was antidote to what is going on in the world today. A way to take in a positive message, and refract or repel the toxic environment created by certain aspects of social media, and the falsehood of those in the business of selling news as an agenda.

They have always been an underground band of sorts, that appeals specifically to their crowd. No is no different, it is more of what has made people fall in love with the band.

CHECK OUT “LOVELESS” BY BORIS HERE:

Acute Mind – Under The Empty Sky

Ignea – The Realms Of Fire And Death

There have been several Bowie live albums released after his passing. This one focuses on a show from Dallas in 95. Bowie was out on tour with Nine Inch Nails, as part of the Outside Tour. There are several bootlegs from this specific tour. It is cool that they’re releasing a quality version, without making it part of a deluxe edition of the Outside album.

So many bands seem to try and fool their audience with an expanded version of an album, that offers very little new material. Oh wow, look at that never before seen picture in the booklet, which was originally determined by the artist to be a throw away.

In my opinion, I’d prefer that they release something like this, a separate live experience so if you want to purchase it for your collection, great. But you’re not forced to purchase an album that’s already been re-released three times just to get some additional music. Give people a reason to buy an album, don’t give them yet another reason to make music trivial.

Powerwolf – Best Of The Blessed

This is a celebration of the band’s fifteenth anniversary. It includes a re-adaptation of the song “Kiss Of the Cobra King”

CHECK OUT THE REWORKING OF THE POWERWORLF CLASSIC “KISS OF THE COBRA KING” HERE: