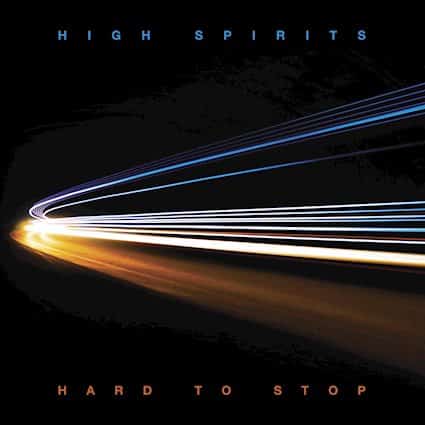 This is one of my favorite bands that I picked up on since starting to podcast. It’s one of the few bands I can actually say I know turned Mark Strigl onto them. Chris Black is the mastermind behind the band, he’s a part of a slew of other bands as well. Every album by High Spirits is full of anthemic hard rock, that to me harkens back to a lot of music that came out in the early half of the 80s.

Black came up with a formula for the band on their first album, and has never really strayed from it. Sure the melodies and the riff vary, but you know exactly what you’re getting from High Spirits when you’re picking up one of their albums. Hard To Stop is no different, if you’re a fan of the band, or like early 80s rock with a very lo-fi feel, check the album out.

By saying this, it isn’t lo-fi by the standards of a noise rock, or garage rock band. What I’m referring to is that it feels like Motley Crue’s Too Fast For Love, Y&T’s Meanstreak, certain NWOBHM bands that were all releasing great music, without over the top production. This leads to all of High Spirits album having a raw, live feel to them. I can’t recommend this album enough.

Here’s High Spirits with “Restless” off of Hard To Stop:

This is the band’s first studio album since 1986’s Dangerous Games. The album features band mainstays Graham Bonnet, Jimmy Waldo and Gary Shea. Joe Stump plays the majority of the guitar on the album with guest appearances by Chris Impellitteri, the late Bob Kulick, Japanese guitarist Nozomu Wakai, and the legendary Steve Vai who was once part of the band. Vai contributed the track “Dirty Like The City” to the album. Rounding out the band is Graham Bonnet drummer Mark Benquechea.

Graham Bonnet is timeless, his voice can still roar, and is as powerful as ever. If you’re a fan of his last few solo albums, or his work with Michael Schenker Fest, this is a continuation of the vocal gymnastics he’s brought forth in recent years. He’s 72 years old and still sounds as ferocious as ever. The band is on their game throughout, there is no spot where you question, why they bothered getting back together. Quite the contrary.

This album is an Alcatrazz fan’s dream come true. Ok, so no Yngwie Malmsteen, or Steve Vai on the entire album, but Joe Stump is one of the best shredder/Blackmore disciples on the planet. He doesn’t have the notoriety of those two, but it doesn’t mean that he shouldn’t. Bonnet, Waldo and Shea have been able to give you an Alcatrazz album in 2020 which sonically sounds up to date, but the songs themselves could have easily followed Dangerous Games in the 80s. It is the perfect continuation of the band’s music.

While others get together for a cash grab, I applaud Alcatrazz for doing everything you want a veteran band to do when presenting new material today.

Here is Alcatrazz with “London 1666” off of Born Innocent:

The all female five piece has always been somewhere between Motorhead, AC/DC, and Danko Jones. The band has had several lineup changes over the years. But, guitarist Filippa Nässil has always been the catalyst behind the band. Much like the three bands I have mentioned above, Thundermother has been good at bringing forth their version of rock n roll. Nothing new here, but that doesn’t mean that the album isn’t entertaining.

Check out “Driving In Style” by Thundermother off Heat Wave here:

Take imagery of Manowar, mixed with Kiss, and lyrics that come straight from the History Channel, and you have a lot of what Warkings is about. When you have a Crusader, Roman, Spartan and Viking, you can expect plenty of lyrics that are influenced by your favorite documentary shows, movies or history books. Warkings was something that I wasn’t expecting to like. Most bands that touch on these types of themes are either over the top power metal bands with sugary choruses, or pagan/folk bands that all tend to turn me off. But I gave this a try, and quite enjoy it.

There are people that will throw the power metal label on this band, but they’re more of a classic heavy metal band in my opinion. Almost everything I’ve heard from the band could have been composed from a lyrical standpoint by a Manowar or Saxon.

Now that isn’t to say that Warkings where not influenced by the same music that lit a fire under a Sabaton or HammerFall. But the music itself is heavier, pulling from things like Black Label Society, Pantera or the speed and shredding of Racer X, making the music itself heavier. The vocals remind me a lot of Robyn McAuley’s lower end, which to me is kind of cool since the tone isn’t what everyone else is doing.

I do think the album is an interesting enough listen if you like old school heavy metal. It does contain some newer influences as well, Melissa Bonny of Rage Of Light A.K.A. The Queen Of The Damned adds guttural vocals to mix. The album’s production is definitely modern, giving it a cool mix of old with new.

Lionheart – The Reality Of Miracles

The Psychedelic Furs – Made of Rain

Alanis Morissette – Such Pretty Forks in the Road

Between The Buried And Me – The Silent Circus Reissue

Genghis Tron – Board Up The House Vinyl Reissue

The Zombies – I Love You Vinyl Reissue

Dee Snider – For The Love Of Metal Live CD/DVD