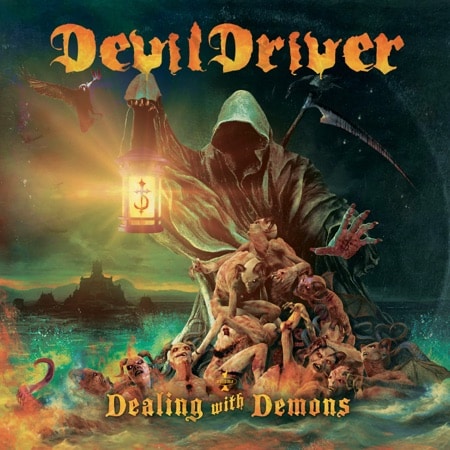 DevilDriver – Dealing With Demons I

For a while now we’ve been hearing about DevilDriver’s double album, Dealing With Demons. The band, or perhaps the label has decided to split the album up into multiple volumes, the first part being now upon us. Part II being unleashed next year.

DevilDriver has been a mainstay of the metal scene for the last two decades. Sure Dez Fafara came from more of a Nu Metal background with Coal Chamber, but DevilDriver has always been about the groove and the heavy. They have always bordered on the more extreme side of the genre, buddying up very close to death metal along the way.

It came as a shock to many that they would put out an all county covers album Outlaws ‘Til The End: Vol. 1 back in 2018. But, given Dez’s past, and if you’ve really listened to his interviews, you’ll know that he’s always loved other kinds of music. So when you hear him experimenting all over this album, it really should not surprise you.

The one time I got to see DevilDriver live, Dez did sing in a lot more of a cleaner fashion than he does in the studio. So a track like “Wishing” really does not stray from what I would expect from the band. Given his influences, I’m honestly more surprised that he hasn’t done it sooner.

Dez has always struck me as a very talented artist. Someone that all these years later has to live up to a brand he created in the early 2000s. When people discuss Greg Puciato, it reminds me of a Dez that broke away from Dillinger Escape Plan, and decided to do whatever he wanted, not really caring about any backlash he might receive along the way.

Again, given what Dez discusses during interviews, it sometimes feels as if DevilDriver confines him to just one part of the musical canvas he wants to reach. I would almost bet he’s composed a ton of music that has little to do with DevilDriver.

My guess is he’s yet to figure out how to unleash a lot of what he’s got locked up upon the world. It’s no easy task, given how fickle metal fans can be, case in point 2015’s Rivals by Coal Chamber.

Dealing With Demons seems to be the first step forward in both being genuine to himself, and his band’s identity. Plus working outside of any preconceived notions people have placed on him and the band. The heaviness isn’t suffering in anyway on this album, they’re just adding more ingredients to the sauce, to ensure that it’s not more of the same old, same old. At the same time, they’re breathing new life into the band.

Dealing With Demons I is an album I would recommend to any fan of the band. It shows that they can be more than just a band that’s trying to pummel you. This is the first time the band is taking you on a musical journey that doesn’t have to be linear throughout. There are ebbs and flows, and a lot of different things that have perhaps remained suppressed in the past.

Check out the video for the track “Iona” off of the new album Dealing With Demons I by DevilDriver:

When tracks off of CMFT stated to be released people were going ape shit. “OMG look at how different those tracks are, they don’t sound like his other bands”. To quote Gunnery Sgt. Hartman, “Well, no shit”.

One of the worst things about music fans, specifically metal fans, is people calling themselves a die-hard, or proclaiming themselves huge fans of a band. Yet, they only know the “hits”, lose track of a band and say “whatever happened to…” when a band has been churning out material consistently over the years.

The reason I mention this, is because there is proof, years of it, where you can check out Corey Taylor doing solo shows. During these shows, he was covering a lot of things that would make him lose his metal cred. Covering the theme from Cheers anyone?

So this is a case of people not paying attention, or needing to be spoon fed something, instead of paying attention, or searching this out for themselves. Essentially the same people that say that there is no good new music. Because you know, they’re expecting it to fall into their lap.

What would be the point in him releasing this long awaited solo album if it sounded exactly like Slipknot or Stone Sour? Sure people are going to identify with his voice, that’s a given. But the compositions steer well away from what he’s known for most of the time.

The music he’s releasing has a lot more to do with straight up rock, alternative rock, or even 90s hard rock, than anything he’s done in the past. He’s probably one of the few artists that can pull this off without most of his die-hard fans going nuts.

First off, because he’s doing this as a solo album, and not under one of the brand names he’s been associated to. Secondly, people have been warned for years this album was being worked on.

Ok, so if you’re a “die-hard” that’s sitting around throwing a fit because they checkout after the self-titled debut by Slipknot or Iowa, then this album isn’t for you. If you’re open minded, are a fan of Corey’s work, and like other rock based genre’s than this album is worth checking out.

Check out the video for “Black Eyes Blue” off of Corey Taylor’s CMFT:

It seems as if leaving Megadeth liberated David Ellefson in many ways. From working with Soulfly, to F5, to starting his own label, authoring books, to the many releases under the Ellefson banner. He’s been back in Megadeth for quite sometime, but that’s hasn’t stymied his creativity in any way.

I’m not a huge covers album guy. Why? Because most bands cover songs you’ve already heard a hundred million times in the past. You know, “Rocky Mountain Way”, “Mississippi Queen”, “Good Times, Bad Times”, or any song that seems like a can’t miss hit, that’s going to miss the mark by a hundred miles.

I have always felt that for me to get into a cover, the artist needs to put a real spin on a track that works for my ears. The band just needs to make the track their own, regardless if it’s a carbon copy or way outside of the box. Being a lesser known track also helps, for example, Metallica covering songs like “The Wait”, or “Blitzkrieg”.

The first thing that impressed me was Ellefson’s nod to old school Def Leppard, On Through The Night to be exact. Once I saw the cover, I knew this album would be going in the direction that I wanted it to. As an old school metal head, seeing a cover that is visually pleasing always lent itself to taking a chance on an album. Tipping the cap to an album I love, well that helped get me instantly interested in the album.

David Ellefson has the clout to call in a lot of heavyweight musicians.  And so he has, featuring current and former members of Megadeth, Slayer, Anthrax, Twisted Sister, Machine Head, Guns N Roses, Ozzy, Ministry, etc.

Much like what Corey Taylor did with various Stone Sour covers EPs, Ellefson has culled together a bunch of fun tracks on No Cover. They’re all performed in a respectful manner, and like what Metallica did way back when, they’re done in a fashion that’s both for the current times, and has David Ellefson’s stamp on them.

No Cover is like a mix tape that you can throw on to take you away, and get you in a good mood.

Check out the Ellefson cover of the Def Leppard classic “Wasted” off of No Cover:

Six Feet Under – Nightmares Of The Decomposed

Gotthard – Steve Lee – The Eyes Of A Tiger

Terror – Keepers Of The Faith