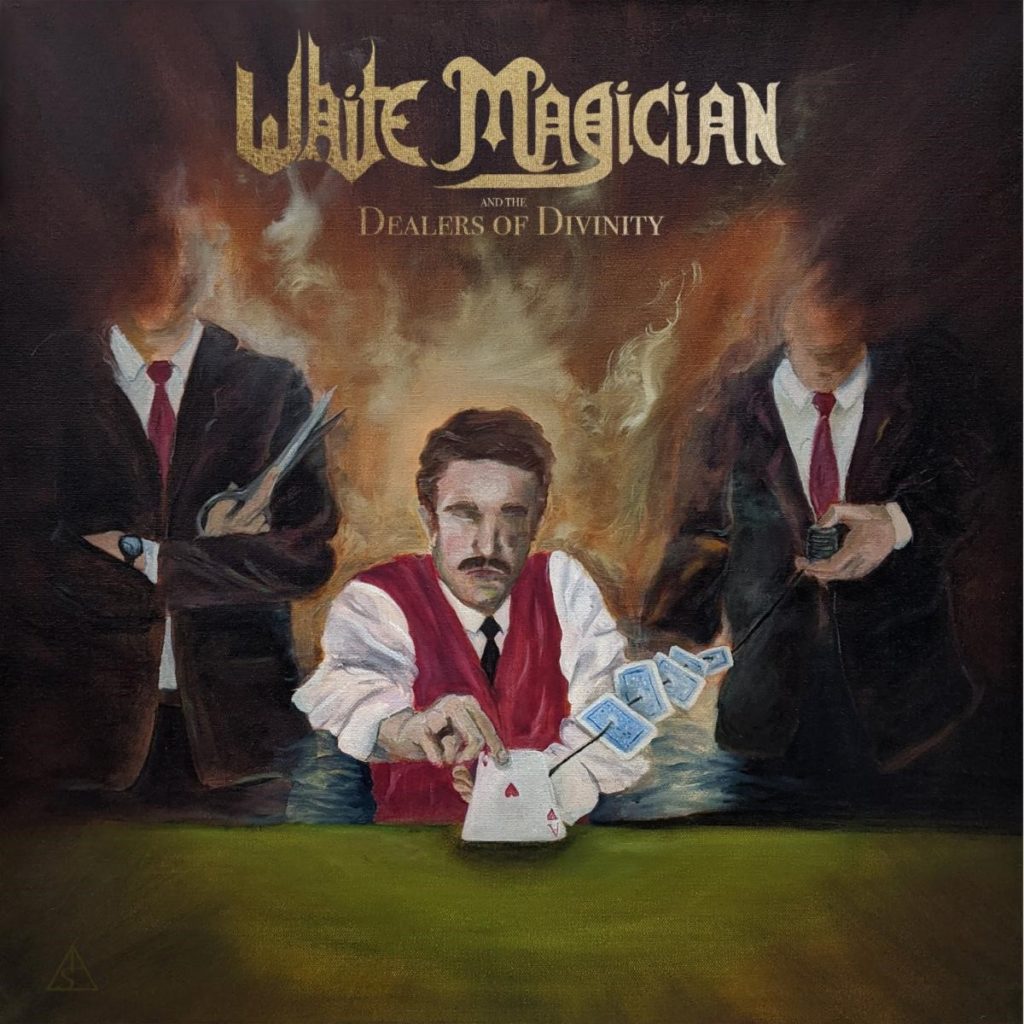 White Magician is a 70s throw back band from Detroit. They will be releasing their debut album Dealers Of Divinity next month. They’re being compared to a combination of Blue Oyster Cult and Mercyful Fate.

Here is some information sent to me about the White Magician and their upcoming release Dealers Of Divinity:

The title for White Magician’s first full-length, Dealers of Divinity, depicts three blind card dealers who are employed by an entity who controls the universe’s behind-the-scenes gaming facility. The dealers laugh at the earth’s inhabitants’ belief that they are free.

They watch them line up and play at this game called “life” and grasp at the illusion that they can actually win. But, ultimately, it is an artifice of the highest degree. Their fate has already been determined by the dealers well before the game starts. It begs the ultimate question: Do we accept this destiny or will we fight to make our own?

This theme is the backdrop of White Magician’s mystical blend of classic metal and ’70s rock on Dealers of Divinity; a challenging array of stellar guitar work and oftentimes labyrinthine song arrangements that stretch well beyond traditional boundaries.

Originally formed in 2010, White Magician — featuring guitarist/vocalist The Great Kaiser, guitarist Mars Mysterio, bassist Mofang Tengrand and drummer Master Commandriani — has gradually honed their sound across three releases preceding Dealers of Divinity: 2016’s The Pledge EP; 2017’s Antipathy single, and 2018’s split with The Great Kaiser’s White Magician (not to be confused with this White Magician) and Prelude to Ruin.

Through trial and error and a laborious songwriting process that is oftentimes born out of a single riff, White Magician eventually arrived at a sound that relies on imaginative storytelling and some of the most advanced guitar interplays heard in classic metal in recent memory.

Recorded over many nights and weekends between May 2018 and December 2019 in Lansing, Michigan by George “The Extortionist” Szegedy, Dealers Of Divinity does not lack substance and drama. The album’s seven songs benefit from not only The Great Kaiser’s smooth vocal delivery but a regular influx of twin guitar melodies, classical guitar arrangements and technical guitar motifs, all immersed in songs that are often a journey onto themselves.

Arcane and ambitious, Dealers of Divinity is an extravagance of magic and power sure to captivate any classic metal fan!

Check out “Mad Magic II: In the Absence of Gods -Bad Magic” by White Magician off of Dealers Of Divinity here:

You can pre-order the Dealers Of Divinity on CD, vinyl or digital download.