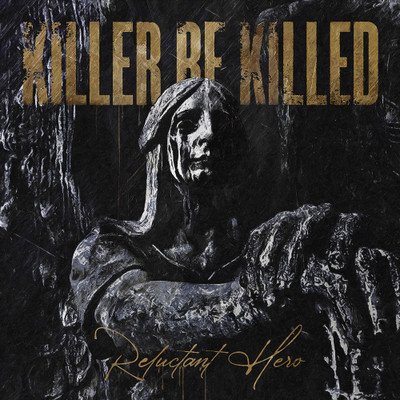 KILLER BE KILLED, ELLEFSON, REFUSED AND IRON MAIDEN ALL HAVE NEW RELEASED TODAY

I remember reading about this supergroup when they first formed and thought, how is this going to work? But it did, I really enjoyed their self-titled release. To the point where I thought if they were one and done, I would be cool with that.

When they announced Reluctant Hero, I suddenly became reluctant to want to listen to anything by the band. Again, I really enjoyed that first album and was scared that this would be one of those sequels that just fell short and was done for money, or because the label demands it, and not because the band wanted to get back together and put this one out.

But once I heard “Deconstructing Self-Destruction”, I knew there was something special about this album. Follow up singles “Dream Gone Bad” and “Inner Calm From Outer Storms” furthered this belief in me.

Reluctant Hero is album of the year material, it is among my favorite albums to be released this year. As good as the debut was, Killer Be Killed has managed to top it. This album is a lot more fluid and cohesive.

There were times on the first album where members of the band felt kind of shoehorned into the track. We have to include this person, just because they’re here, that isn’t the case on this album at all.

Killer Be Killed has managed to take each individual part that makes up the band and leverage everyone’s abilities. Each of them shines through, musically, and the vocals are really well done, and over the top good.

Everything just clicks and works, with each member adding their ingredients to the recipe, helping take each track to the next level.

I can’t recommend this album enough, I do think that if you’re a member of any of the components of the band, you’ll really enjoy Reluctant Hero.

Check out the Killer Be Killed video “Dream Gone Bad” off of Reluctant Hero here:

You can check out Killer Be Killed’s Reluctant Hero on Spotify:

If you like what you hear and want to pick up the album, use our Amazon links. We’re an Amazon affiliate so we do receive a commission for every qualifying purchase. Pick up Killer Be Killed’s Reluctant Hero here.

This year has been full of things that didn’t go as planned. This album was supposed to be released earlier this year, hence why it was posted last month on the site. Sorry for the mix-up.

It seems as if leaving Megadeth liberated David Ellefson in many ways. From working with Soulfly to F5, to starting his own label, authoring books, to the many releases under the Ellefson banner. He’s been back in Megadeth for quite some time, but that’s hasn’t stymied his creativity in any way.

I’m not a huge covers album guy. Why? Because most bands cover songs you’ve already heard a hundred million times in the past. You know, “Rocky Mountain Way”, “Mississippi Queen”, “Good Times, Bad Times”, or any song that seems like a can’t miss hit, that’s going to miss the mark by a hundred miles.

I have always felt that for me to get into a cover, the artist needs to put a real spin on a track that works for my ears. The band just needs to make the track their own, regardless if it’s a carbon copy or way outside of the box. Being a lesser-known track also helps, for example, Metallica covering songs like “The Wait”, or “Blitzkrieg”.

The first thing that impressed me was Ellefson’s nod to old school Def Leppard, On Through The Night to be exact. Once I saw the cover, I knew this album would be going in the direction that I wanted it to. As an old school metalhead, seeing a cover that is visually pleasing always lent itself to taking a chance on an album. Tipping the cap to an album I love, well that helped get me instantly interested in the album.

David Ellefson has the clout to call in a lot of heavyweight musicians.  And so he has, featuring current and former members of Megadeth, Slayer, Anthrax, Twisted Sister, Machine Head, Guns N Roses, Ozzy, Ministry, etc.

Much like what Corey Taylor did with various Stone Sour covers EPs, Ellefson has culled together a bunch of fun tracks on No Cover. They’re all performed in a respectful manner, and like what Metallica did way back when, they’re done in a fashion that’s both for the current times, and has David Ellefson’s stamp on them.

No Cover is like a mix tape that you can throw on to take you away, and get you in a good mood.

Check out the Ellefson cover of the Def Leppard classic “Wasted” off of No Cover:

Check out No Cover by Ellefson on Spotify:

Support the band, and the site by picking up the album using our Amazon Affiliate links. You don’t pay anything more, but we get a small kickback for any qualifying purchase. Pick up No Cover by Ellefson here.