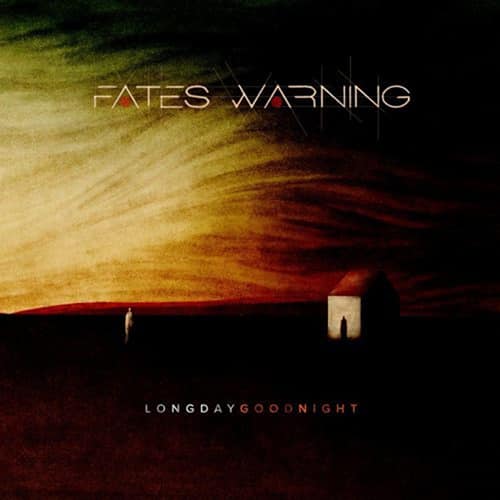 Fates Warning has been at the forefront of progressive metal for close to four decades. They have influenced countless bands along the way. With album number thirteen, Long Day Good   Night, they offer up their longest release to date, thirteen songs, clocking in just under 73 minutes.

This album offers up elements not found on previous albums by the band. And there is no question about how good the musicians are on their instruments. The question comes down to, was it a good idea to release this much music?

Admittedly I’m not the biggest fan of prog metal. But I do love the last to Arch / Matheos albums quite a bit. For me, they have contained the perfect amount of long moving pieces and short straight-ahead metal.

This album has quite a few tracks that just meander, and would have been better served if they were shorter and straight to the point. Just my personal preference.

With all of this said, they, like pretty much every big prog metal band out there, count on having a huge die-hard following. These same fans will be picking this album up regardless of what I have to say. The album isn’t bad, it just didn’t need to be this long in my opinion.

You can pick up the album here, know that we get a small kickback if you choose to use our Amazon links.

Alter Bridge is probably one of the biggest hard rock bands of the last decade and change. The band was able to pull off something most musicians can not. They essentially switched out the one component that most people loathed, from a highly successful band. Switched singers, and names, and no harm no foul!

I don’t think people realize how difficult that is Sammy Vs. Dave, Bon Vs. Brian, when was the last time you heard Scott Vs. Myles?

Yes, there are rumblings about Creed getting back together in the future. But for all intents and purposes, Alter Bridge has obtained the street cred they were never able to obtain under their old moniker. Sure, Creed has outsold them, but they garner a completely different level of respect.

Walk The Sky 2.0 is made up of the new track “Last Rites”, plus six other live tracks. This is another band that has a massive following that will pick up this release regardless of it being an E.P. or not. You can find a deluxe version which combines the E.P. with 2019’s Walk The Sky

Here is Alter Bridge with “Last Rites” off of Walk The Sky 2.0:

You can check out the latest EP by Alter Bridge Walk The Sky 2.0 here on Spotify:

If you are in the U.S. you can pick up Walk The Sky 2.0 from here. If you are anywhere else in the world you can support the site by using the links you find here. Remember that we are Amazon affiliates and get a small percentage of any qualifying purchase.

Orianthi is a platinum-selling artist. She’s been associated with Michael Jackson, Carlos Santana, Carrie Underwood, Alice Cooper, and more. Let the fact sink in that every one of those artists is completely different from each other. Yet they have wanted to work with her.

O marks Orianthi’s first new album in seven years, her first since 2013’s Heaven In This Hell. It is her fourth solo album, and also her first for Frontiers Records.

Is she a guitar goddess? In the eyes of many yes, and that’s why I think a lot of the reviews that I’ve seen online have not known how to interpret this album. “It had so much promise”, what did you expect, she was going to record a full-on blues album?

She is a pop-rock artist, with at times hard rock overtones. Yes, she’s played with Steve Vai and Alice Cooper. She’s had a relationship with Ritchie Sambora on and off the stage. But her solo work has for the most part always been for better or worse pop-rock.

Once you can comprehend that, you’ll see that the album is good at delivering rock flavored pop anthems. Not all that different than what say a Lenny Kravitz has been doing for a long time.

You can pick up O from Amazon here.

Lords Of Black – Alchemy Of Souls

Angelica – All I Am

Surma – The Light Within

Anti-Flag – Beyond The Barricades: The Story Of Anti-Flag

Reb Beach – A View From The Inside

Tarja – From Spirits And Ghosts: Score For A Dark Christmas Re-Release