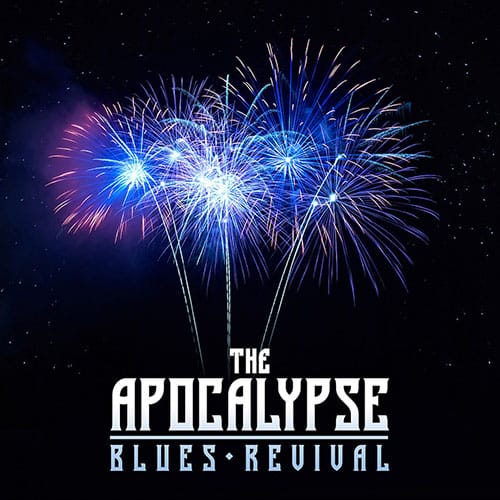 The Apocalypse Blues Revival is an on again off again band, that was actually previously known as The Apocalypse Blues Revue. The band features Godsmack’s Shannon Larkin and Tony Rombola, with Brian Carpenter on bass. The difference between the two is the Revue had Ray Cerbone on lead vocals. While The Revival has Shane Hall on guitar and vocals.

Although the band was originally more of a full-on blues band, the new album mixes in a lot of psychedelia. The lyrics focus on a central figure that is involved in the dark arts.

Although this will be marketed to fans of Godsmack, this has very little to do with what that band does. It is another wrinkle in the awe-inspiring career of Shannon Larkin. Showing that he’s much more than a one-trick pony. He’s played with a lot of big names and continues to record with essentially anyone that will allow him on their tracks, regardless of the genre.

As much as Shannon sticks out, this is definitely a band effort. Each member plays an important part in making this music happen. The sum is greater than its individual parts or players.

If you were into the last Vessel Of Light album, or are into Danzig, this may be an album worth checking out. It is blues on the darker end of the spectrum, with similar lyrical themes.

Here’s The Apocalypse Blues Revival with “The Doorway”:

Undecided? Listen to The Apocalypse Blues Revival on Spotify here:

The New York band Foxy Shazam was one of the only bands to follow me back in the MySpace days, so I’ve been a fan ever since! They have always been a solid rock band mixing in at times aspects of hard rock, and some pop sensibilities to differentiate them from others. At the end of the day, music is either good or bad, regardless of what genre people want to label a band.

RELATED: CHECK OUT RECENT INTERVIEW WITH JAKE DAVIES FROM OF LIMBO

This is the band’s sixth album. It is self-released and was recorded, thanks to the pandemic, by all five members from the comfort of each of their studios/homes. The album recalls rock more reminiscent of the 70s and at times 80s, mixed with a modern production sound.

For those that may pan this band initially because of what lead singer Eric Nally has done outside of the band, or the band’s image. This album may actually be worth your time. If you’re looking for something in the vein of Queen, Styx or E.L.O., this might be worth checking out.

Check out “The Rose” by Foxy Shazam here:

You can listen to Foxy Shazam’s Burn here on Spotify

If you like what you hear and are so inclined to pick the album up, please help us out by using our Amazon links to do so.

HERE ARE SOME OTHER ALBUMS THAT MAY INTEREST YOU

Yashira – Fail To Be

Between The Buried And Me – Colors Vinyl

Blind Guardian – Imaginations From The Other Side 25th Anniversary Edition