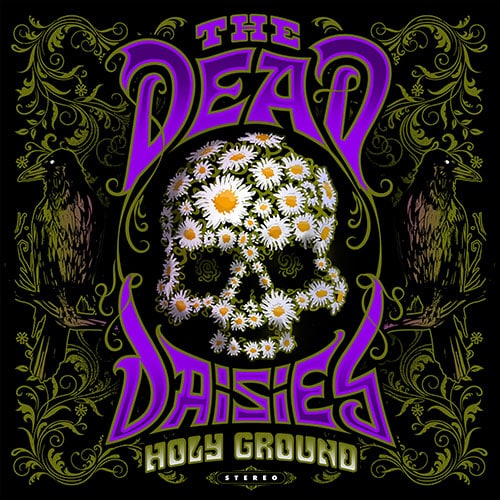 The return of David Lowy and his band The Dead Daisies. There were rumblings for some time that John Corabi would be exiting the band to focus on his solo work. It seemed as if the band held out until they confirmed Glenn Hughes before the lineup change was announced.

It was an odd circumstance, they had just released an album, and then a week later, Corabi out, Hughes in. Makes you wonder if that release was just an afterthought?

Given that Hughes, known for his magnificent pipes, is also a monster bass player, the band also went from being a five to a four-piece. The current lineup consists of Hughes, Lowy, Doug Aldrich on guitar, and Deen Castronovo on drums. Although it has already been announced that Tommy Cluefetus will be touring with the band instead of Castronovo.

Getting to Holy Ground, you can immediately feel not only Glenn’s voice but his funk and swagger on these songs. It adds another dimension, or gear if you will that the band was previously lacking. That isn’t a knock on Corabi, it just seems that Glenn adds something different that helps the band’s sound evolve.

Aldrich and Hughes have also worked together in the past when the guitarist formed part of Hughes’ solo band. This familiarity also seems to pay off here, with the guitars getting a tad bit more aggressive.

No knock on any previous member, it just feels like Lowy had always been working on the recipe. It’s as if he was trying to find the right combination all these years. He may have found it with Holy Ground.

If you own any of the band’s previous material or have it in one of your streaming playlists, this album will be worth your wild to check out.

Check out “Holy Ground (Shake The Memory)” off of The Dead Daisies latest release Holy Ground:

If you really know your rock music, you should know who Damon Johnson is. He’s been kicking people’s asses since the 90s, and again another musician you can point to when one of your curmudgeon friends says “90s music suck”.

If you like metal, you’re a poser if you like hard rock or any other rock-based music. This is beyond stupid because at the end of the day people’s opinions are subjective and not fact.

Damon has always straddled the line of various forms of rock music. Some of his riffs could be considered on the metal side of things, you listen to a riff like the title track off of this album Battle Lessons, and it could easily be used in a song by Judas Priest or Anthrax.

At the same time, this same riff, and the melodies that follow in the chorus could have been used by Cheap Trick. That’s the beauty in what Damon does, he’s like an antenna, receiving all of these signals, then crafts and pumps out interesting combinations that you were not expecting.

If you’re a fan of Damon’s previous work, this album will not disappoint. It is a must-have to round out your collection.

Jason Bieler has always been an interesting character. Whether it’s his presence on social media. His work behind the scenes within the music industry. Or his musical output as a solo artist or part of a band.

Songs For The Apocalypse proves various things. He can experiment all he wants with different styles and influences. But at the end of the day, it’s all Jason Bieler.

If you didn’t have a name like Saigon Kick associated with him. Or a mega-hit like “Love Is On The Way” with his name in the credits. People would be fawning over him like they do Devon Townsend, who actually appears on the album.

Put those things aside, and let yourself get lost in this album. And you’ll see that this is a solid release from an artist that you may have panned otherwise.

The album is chalked full of guest appearances. As mentioned above, Devon Townsend is on the album. But wait there is more!

Each one of them helps add their ingredients to the mix. Combining them with Bieler’s vision helps propel each of these tracks over the top.

This album is recommended to those that are fans of Bieler’s previous releases. As well as those just looking for something different.

Check out “Bring Out The Dead” off of Jason Bieler & The Von Bielski Orchesta’s Songs For The Apocalypse:

HERE ARE SOME OTHER NEW RELEASES THAT DROP TODAY

Kickin Valentina – The Revenge Of Rock

Labyrinth – Welcome To The Absurd Circus