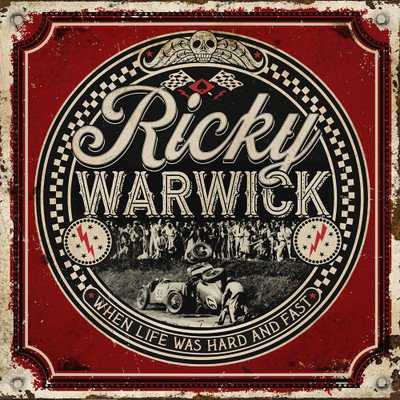 Ricky Warwick – When Life Was Hard And Fast

Ricky Warwick is probably best known to fans as the lead vocalist of Black Star Riders. But I’ve known about him and been a huge fan since his first band, The Almighty.

He has released several solo albums over the years, that obviously showcases what he’s injected into all of the bands he’s been involved with. This album is no different, it contains contributions from some of the usual suspects, like Def Leppard’s Joe Elliott, Luke Morley of Thunder, and Andy Taylor who has produced the likes of Thunder, and Rod Stewart, as well as played in Duran Duran and The Power Station.

For the album, he’s put together a band, which could in its own right be considered an all-star band. You have Black Star Riders bassist Robbie Crane on bass. Keith Nelson on guitar, with Xavier Muriel on drums, both of whom were in Buckcherry for quite a few years. Nelson actually produces and co-writes a lot of what appears on the album.

There is no reinventing the wheel here. Ricky’s solo work has always been a mixture of Thin Lizzyesque hard rock, with the acoustic folklore approach of a Johnny Cash. Mix in some of Mike Ness of Social Distortion’s swagger, and as he recently copped to Talking Metal, some old school R&B, and you’ve got the main ingredients of what makes up his solo work.

That doesn’t mean he doesn’t stray from this from time to time, but when things seem to be going off course, you can bet he reaches for one of these elements to right the ship.

If you’re a fan, there is no doubt in my mind you will be checking this release out.

Check out Ricky Warwick with the title track off of When Life Was Hard & Fast:

Help the bands featured here, as well as the site by picking up any of these releases using our Amazon links. We are an Amazon Affiliate, pick the Amazon store of your choosing.

If you’re a member of my Patreon page, you would have seen a video for the track “Firewings” by this Finnish band. Here are some of the comments we received about the band, and the track.

I like this! Nothing flashy, just straight-up rock. Decent vocals. I will check this album out. Firewings. That makes me hungry.

I agree it’s a decent enough song. The production could be better.

If you have any interest in becoming a Patron and seeing your reviews here, click on this link to find out more information.

HERE ARE SOME OTHER RELEASES YOU MAY ENJOY

Harakiri For The Sky – Maere

Wizard – Metal In My Head

Temperance – Melodies Of Green And Blue