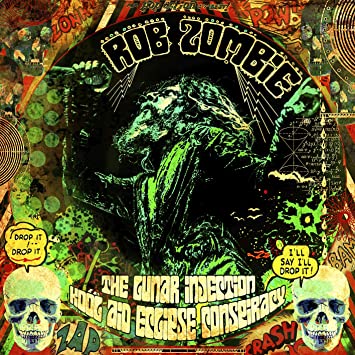 Years ago I was tasked with having to review one of Rob Zombie’s previous albums, Educated Horses. At the time I was writing for a publication, that had a ton of columnists writing about progressive metal, death metal, and metalcore, among other metal sub-genres.

That album kind of fell on me because no one else wanted to touch it. I loved the album, and my final assessment was not every album you listen to needs to be the most technically proficient thing you’ve ever heard. An album can just entertain you, it can be an escape without you needing to analyze how many beats per minute the drummer is playing or if the guitarist’s palm mute, arpeggio sweep combination was better or worse than John Petrucci or Misha Mansoor.

Rob Zombie is one creative beast. We know this from his past albums, his art, and his movies. The Lunar Injection Kool Aid Eclipse Conspiracy was technically recorded years ago. But with everything he had going all, he wasn’t able to release the album until now. Although both he and guitarist John 5 had been talking it up in the press for years.

Speaking of John 5, he has been his secret weapon since joining the band. Doing what he does best and further making me think that Zombie is the first artist to properly understand and use his talents. If you have him in your band’s lineup, the lead singer and bass player shouldn’t be writing and recording all of the guitar parts John 5 is going to be playing live. But that’s just me!

The album checks off all the boxes, it is everything you’ve come to know from Zombie. Old school Zombie, with a modernized approach. It has that same mix of eclectic sinister grooves you’ve come to know from him. Mixing and matching all types of things, essentially Frankensteining bits and pieces of music to bring his monster to life. More importantly, making pretty much everything on the album work.

If you’re a fan of Rob Zombie’s, you need to check this album out. If you’re just a casual or new fan, and just want a fun album to sit back, be entertained, and disconnect for a while, then this might be the right album for you as well.

Here you have a German band that’s been doing their thing since 1996. Although they released three demos over the years, their first studio album didn’t come till 2008’s Vale. My introduction to the band didn’t come until 2017’s Gunmen. Sure I started podcasting in 2009, but the flood gates opened then, and they just sort of fell through the cracks.

Final Days is a sci-fi concept album. It sees a shuffling in the band’s lineup, with front Sebastian “Seeb” Levermann dropping the guitar, bassist Niels Löffler switching to guitar, and drummer Dirk Meyer Berhorn, well, remaining on drums. To compensate, the band has drafted Patrick Sperling and Steven Wussow into their ranks.

The band isn’t inventing anything new on Final Days. They’re ultimately adding another chapter to their career, tacking on new subject matter. While ever so slightly tweaking what they’ve always done. To call them a Power Metal band is oversimplifying things. There are a lot of things that take place on the album that don’t lend themselves to your typical rah-rah Power Metal band.

Don’t get me wrong, there are a lot of big riffs, and a lot of anthems to sing along to. But it isn’t that simple, it doesn’t just sound like a knock-off of Halloween, or Maiden. Sure you have bits and pieces of that, but you get prog elements and keyboards that are more reminiscent of Dream Theater than say Hammerfall. If you’re into Avatar, but aren’t totally sold on Johannes Eckerström’s vocals, and yearn for cleaner singing, you might want to check this album out.

Another very entertaining album that sounds huge, and is full of thick and well-thought-out riffs. I recommend this album to anyone that’s never checked the band out before. Not only is it well composed, it just sounds really good.

Here’s Orden Ogan with “In The Dawn Of AI”

Eyehategod – A History Of Nomadic Behavior

Thunder – All The Right Noises

Help the site out, and any of the artists featured in this post by using the links found here to pick up any of this week’s new releases.