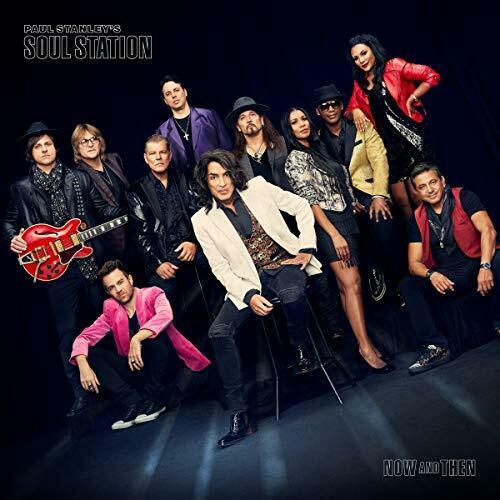 My first thought when Soul Station was announced was why? I loved Kiss’ last album Monster, so my thought process was, I want another Kiss album. Soul music? This is something that older people would force me to listen to when I was a kid, and really didn’t care for it at the time, why would I want to listen to this now?

A few years back I saw The Defiant Ones docu-series for the first time. I tuned in for Nine Inch Nails, and the now under fire Marilyn Manson. But what I came out of the series with was a love for Dr. Dre, and how he works with music. There is a scene where he’s remixing a song, and he points out the instrumentation of the track. Honestly, it blew me away and made me realize how much more complex these AM radio hits actually were.

As someone that grew up playing in the school band, marching band, etc. I could appreciate listening to all of the various percussive parts, the woodwinds, violins, etc. It made me also further appreciate the documentary on the Wrecking Crew, and how they put music together.

Why I bring all of this up, is because I went into this album thinking WTF, and was instantly sucked in by how great this album actually sounds. This is a covers album for the most part, with a few originals sprinkled in. But, unlike the Saxon album that was just released, it isn’t the millionth time you’re hearing all of these tracks. Because you know we needed another version of “Paint It Black” and “The Immigrant Song”. Love Saxon, but what a waste of an album and talent.

Now And Then is full of tracks that if you grew up in the 70s and 80s, like me, you heard on AM radio or stations like CBS FM in New York. What’s great about the song selection is that they aren’t the obvious hits that have ended up on a million movie soundtracks or R&B and Soul compilations over the years. Again, they’re recognizable songs, but it isn’t like they’re covering “Stairway To Heaven” or “Rocky Mountain Way”. These are great songs, to begin with, and it’s a cool mix of new production sounds with old-school recording tactics. You can hear every instrument, every percussive element, and it’s mixed in a way that you aren’t only hearing Paul Stanley. Each member shines throughout.

Will the average metalhead, or even Kiss fan search this album out? Probably not, but those with an open mind will appreciate what Paul’s tried to achieve with this album.

Also, think of this, there is a lot less pressure and expectations placed on Paul Stanley putting out this album, versus putting out another Kiss album. So I get, after listening to it, why he decided to go this route. If you’re a music junkie like myself, it may be worth your wild to check this album out. If you’re someone that has to look over your shoulders before giving your opinion about music or need to always have your metal cred on display, maybe skip this one. And let those that enjoy Now And Then, actually do so.

There have been quite a few “retro” waves over the course of the last two decades. You have to figure it probably all boils down to kids that grew up listening to bands that their piers or the radio weren’t into at the time. Thus latching onto things like thrash, synthwave, nu-metal, and what others will deem alternative hard rock or grunge.

Cicadastone is an Australian band that does the latter. There is no confusing the fact that they’re a hard rock band that took inspiration from a lot of music that came out in the 90s. But before you jump to conclusions and think you’re going to be hearing a Nirvana rip-off or Eddie Vedder yurl, you’re wrong.

Think more along the lines of the heaviness you could find on Stone Temple Pilot’s Volume 4, mixed with elements of Alice In Chains and Jane’s Addiction. Sure, you can find things and say “aha Nirvana”, but it isn’t all they do. It’s like when people say Foo Fighters and say “they sound like Nirvana because Dave Grohl is in the band”. You say 90s, and people will always point to the biggest bands of the era.

If you read 90s, and that turned you off, then keep moving along. You need to come into this album with an open mind. As I often say, you can like pizza and spaghetti too. Don’t let others place limits on your listening habits. If you enjoy the album, who cares what genre it is, or when it came out.

Here’s Cicadastone with “Box Of Anger”:

Looking to show your metal cred, and want something new to listen to? Then Adamantis’ Far Flung Realm may do the trick. This album was self-released a few months back but is now being released by Cruz Del Sur Music.

This album is not what I expected at all. I checked out Boph (The Ravensong), and given the imagery, the first thing I thought of was great another pagan, folk, or doom band. But man, was I wrong, the album is closer to something you might expect from Iron Maiden, or Helloween.

So if the first two albums I featured today don’t do it for you, check this one out, I’m sure it will tick off plenty of boxes!

Agent Steel – No Other Godz Before Me

Volbeat – The Strength / The Sound / The Songs Vinyl