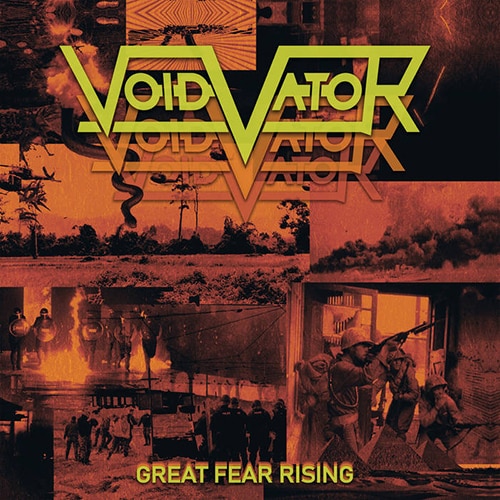 Void Vator is a band that I’ve followed since its inception. If you’ve been a fan of my podcast you’ll know that I’ve interviewed their guitarist Erik Kluiber more than any other person. He’s always been good to me, so I’ve never had an issue reciprocating, and helping pimp any of his releases.

But this goes beyond that, after my decade-plus in the realm of podcasting, pretty much every interview I do is because I have an interest in the bands or people that I’m speaking to. If Erik’s music was utter crap, I wouldn’t be featured as part of today’s post. Not taking anything away from the albums listed below, but the albums that I actually write about are because I really like or have liked the band at one point in time.

A lot of releases are sent my way, so I don’t have the time to listen to everything. Chances are, you’re in the same boat and only check out albums from bands you know, or are recommended to you. I hope that these posts help turn you on to music you wouldn’t otherwise check out. Or search an album out to say “he’s totally wrong, I love it no matter what this dope posted!”

Void Vator has always kicked things up a notch from one release to another. I’ve said this in the past, I get hesitant to listen to bands at times because they have been so good in the past that I don’t want to be let down. Great Fear Rising, once again sees the band progress. The album is heavier than anything they’ve done in the past, and the overall composition of the songs is a lot more solid.

Lucas and Erik have really brought their A-game here with the way that their playing intertwines with one another. This is something that I recently asked Lucas (interview coming today), how he and Erik push one another. The results are apparent on this album, where there are definitely moments that are influenced by old-school tandem guitar teams.

This album features nine tracks and flies by when listening to it. It’s just straight-up hard rock, with a modern production spin. You oftentimes have bands that have to release something outrageous like sixteen songs because they have to fill an entire CD. By that logic, why not release 45 tracks now given that there is no cap on digital releases? Much like we discuss on my Galaxy Of Geeks Podcast why release twenty-four episodes when fourteen of those are just filler?

The album flows well, just gets straight to point, with no filler. The riffing is great, and the secret weapon is possibly the bass playing of Sam Harman who is the glue that kind of bring everything together.

Haven’t checked out the band before and looking for something new to get into? Great Fear Rising by Void Vator is not only a great gateway into what the band offers, but it is also another reason why there is good music still coming out every Friday.

Here is Void Vator with "I Can't Take It" off of Great Fear Rising.

Want to support Void Vator, stream their album on Spotify or Apple Music. Or you can just go to their Bandcamp and pick the album up there. Alternately, check out my Amazon Affiliates links at the bottom of this post to order the album.

Mister Misery – A Brighter Side of Death

Walking Bombs – Tears We Should Have Shed

Bodom After Midnight – Paint The Sky With Blood EP

Motorhead – Louder Than Noise…Live In Berlin