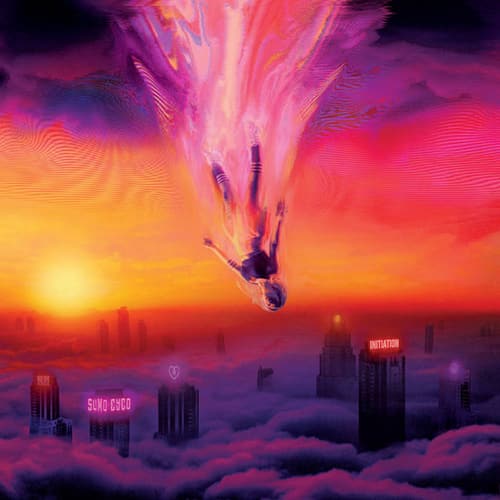 I have been a casual fan of Sumo Cyco for some time now. This band has never really set any boundaries on themselves, being able to meander between hard rock, metal, pop, ska, and reggae. When asked to describe them, I’ve often said that they’re a heavier version of No Doubt.

With Initiation, Sumo Cyco has really upped their game, on all levels. This is their best album from a composition standpoint, sonically, and just overall creatively. They have been releasing videos for tracks off of the album for some time now, and they’re all done by lead singer Syke “Sever” Sweetnam, and Matt “MD 13” Drake, the only two constants throughout the band’s career.

For any band that’s bitched about the pandemic, Sumo Cyco seems to have taken this downtime to do the best that they can at improving every facet of their band. Engaging with their audience on many fronts, and once again crafting some pretty cool music. Just take a listen to the first three offerings off of the album “Bystander”, “No Surrender” and “Vertigo” and try not to get one of these three tracks stuck in your head!

The album is catchy modern hard rock, that mixes in a bunch of different influences. Looking for something different this weekend? Well then this album may be worth your wild.

Here is Sumo Cyco with "Vertigo":

Check out Initiation by Sumo Cyco

Not sure whether this album is for you or not? Check it out on Spotify, Apple Music, or Bandcamp below.

RELATED: Check out our Patron curated Best of 2021 playlist here.

Tommy’s RockTrip is the new project by Tommy Clufetos. He’s best known for playing with Ozzy Osbourne, Black Sabbath, Rob Zombie, Alice Cooper, and Ted Nugent (among others). I got to interview Tommy this week, and he mentioned that this album is the result of just needing to do something during the pandemic.

Beat Up By Rock N’ Roll contains the first music Tommy has ever written, and actually sung on. Carrying most of the vocal duties is Eric Dover, best known for his time in Jellyfish and Slash’s Snakepit. But Clufetos does sing three of the tracks on the album. He decided to do so after realizing that his original demo vocals fit the tracks pretty well.

As I described to Tommy during our interview this album comes down to two things. First off, it is a very fun album, and second, it is packed with a ton of attitude. He recorded the album live in a barn, using modern techniques, but in an old-school manner. No click track, and very few overdubs. If they messed up while recording, they did the entire take over again. This also opened them up to improvising on the fly. Dover’s parts and the guitar solos were dubbed over later, but the drums, bass, and rhythm guitar parts were all done at the same time. Although it may have taken several tries to record a song, these are all played straight through.

Again, fun and attitude, if you’re looking for a straight-up hard rock album that takes you on a musical journey, with no two songs sounding alike. This may very well be your new jam!

Here is Tommy's RockTrip with "Welcome To The Show":

Check out Beat Up By Rock N' Roll by Tommy's RockTrip

Check out the album before picking it up on Spotify or Apple Music. You can also pick it up directly from Frontiers, or from my Amazon Affiliates links below.

Robin McAuley – Standing On The Edge

Cvlt Ov The Svn – We Are The Dragon

Kayak – Out Of This World

Mephitic Grave – Into The Atrium Of Inhuman Morbidity

Beastwood – The Long Road To Ho

Stella and the Very Messed – Marigold

Save The World – One