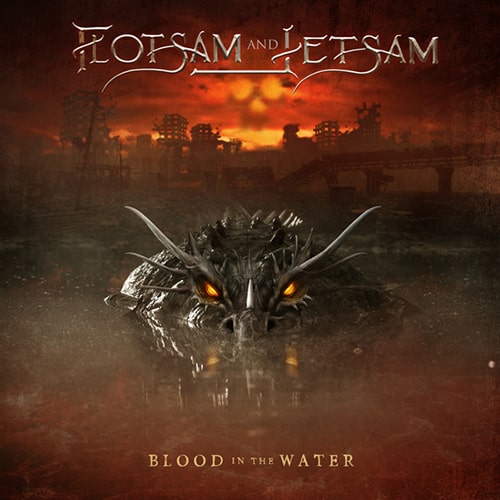 FLOTSAM AND JETSAM RETURN WITH BLOOD IN THE WATER

Flotsam And Jetsam - Blood In The Water

Flotsam And Jetsam return with album number fourteen. Blood In The Waters is the second album with Ken Mary on drums, best know for his work with Alice Cooper and a slew of other bands. This album also marks the debut of Bill Bodily on bass. I had the pleasure of interviewing him while he was in Toxik.

Their previous release The End Of Chaos made a lot of people’s end-of-year lists. Truth be told that album had a lot of really good tracks on it. So given the band’s longevity and the fact that The End Of Chaos was so strong, I was hesitant to listen to Blood In The Water. Can they still deliver, or was their last album where they blew their last remaining load?

I’m glad to say, it wasn’t Blood In The Water picks up right where the last album picked up. It reminds me of what bands like Overkill have been able to do. They find their way back on course and stay there. Flotsam And Jetsam seem to have found their way back to where most thrash fans want them to be. And look, although they dabbled in different things here and there, they’ve never honestly put out a hot pile of dung. Some things have obviously worked better than others.

If you enjoyed The End Of Chaos, check Blood In The Water out. If you haven’t check out either and are a fan of their previous work, do yourself a favor and check both albums out.

Here is Flotsam And Jetsam with "Burn The Sky" off of their latest release Blood In The Water.

What to check out Blood In The Water by Flotsam And Jetsam?

Pick your poison, check out my Offspring playlist on either Spotify or Apple Music here.

RELATED: Check out the Patron curated 2021 playlist, it features tracks from Blood In The Water.

Van Canto – To The Power Of Eight

Lucifer – Gone With The Wind Is My Love 7″

Rhapsody Of Fire – I’ll Be Your Hero