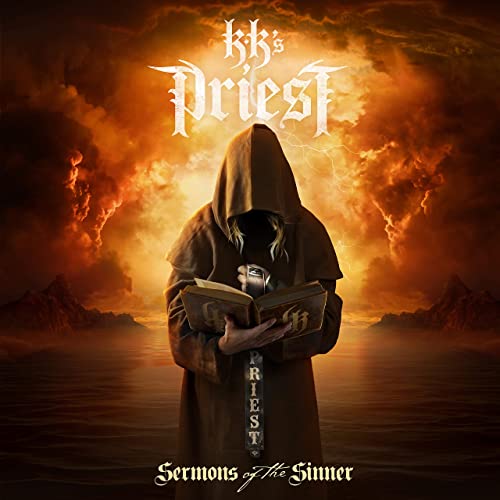 K.K. Downing Is Back With KK's Priest

KK's Priest - Sermons Of The Sinner

Word came down a while back that K.K. Downing was reuniting several former members of Judas Priest, and putting his own band together. While Les Binks was originally involved in the band, Tim “Ripper” Owens is the only former member of Priest to be involved in the debut album by KK’s Priest called Sermons Of The Sinner.

K.K. has been a metal institution since the 70s. He is just as much a Metal God as the other members of his former band. He helped craft a lot of, if not all of the classic tracks by the band that you’ve come to love. His dueling solos helped shape metal into what it’s become.

I don’t get that people have knocked the lyrics of the songs on this album. Let’s be honest, what Judas Priest song has mind-numbing, cerebral lyrics that make you think about fighting world hunger or poverty? KK’s Priest is writing to an already established audience, that is going to be curious as to what Downing is doing with his new band.

The music is just flat-out entertaining and I have to tell you unless Judas Priest released Firepower, Sermons Of The Sinner would be the best Judas Priest album since Demolition in my opinion. The four singles that were released beforehand are the songs that stand out to me the most.

That said, the album is strong throughout, but it’s no Firepower. The last Judas Priest album was an instant classic. The second I heard certain songs off of the album I knew they would automatically get played a ton. To be fair, there are tracks off of this that fall into the same category.

But it isn’t to the point where I would say Judas Priest needs K.K. back. Firepower proved that they didn’t. But that was a Hail Mary, because Redeemer Of Souls just sounded bad sonically and had very mediocre songs.

I’m already contemplating putting a Judas Priest family playlist together with tracks from all of the bands that are loosely associated with the almighty Judas Priest. KK’s Priest, Halford, Fight, 2Wo, maybe some Lauren Harris, who knows!

Every fan of the band should check KK’s Priest’s Sermons Of The Sinner.

Here is KK's Priest with the "Return of the Sentinel" off of Sermons Of The Sinner.

Interested in checking out Sermons Of The Sinner by KK's Priest before picking the album up?

Asking Alexandria – See What’s On The Inside

Rev Jones – In The Key Of Z

No One Is Innocent – Ennemis

Unforged – Eye For An Eye

Enslaved – Caravans To The Outer Worlds

Motley Crue – Shout At The Devil