I had the pleasure of interviewing Samuel Nyman, lead singer of the band earlier this year. You can check the interview out here.

One of the things that most stood out to me from my interview with Samuel is that the band is accused of not being original. Let’s be honest, what band in 2021 is original? One thing is blatantly ripping something off and going as far as to say you’re not a fan. But another thing is to say, yes these are my influences, and they’re very apparent.

The band’s two biggest influences are probably Judas Priest and Queensryche. If I was to draw comparisons, I would say the album is a mix between Painkiller, Firepower, with aspects of Operation Mindcrime and Empire mixed in.

Those are some huge shoes to fill, and I’m not saying it’s exactly the same, or better. I’m just saying that Armageddon was influenced by those albums. I’m also saying, if you like those albums, you’ll probably like this one as well.

If you checked out KK’s Priest’s Sermons Of The Sinner and felt like you needed more Priest-like music. Or felt as if the album didn’t give you enough. Then I’d recommend checking out Armageddon by Manimal.

Here is Manimal with "Chains Of Fury" off of their latest album Armageddon.

Interested in checking out Armageddon by Manimal before picking the album up?

Not sure whether this album is for you or not? Check it out on Spotify, Apple Music, or Bandcamp below. 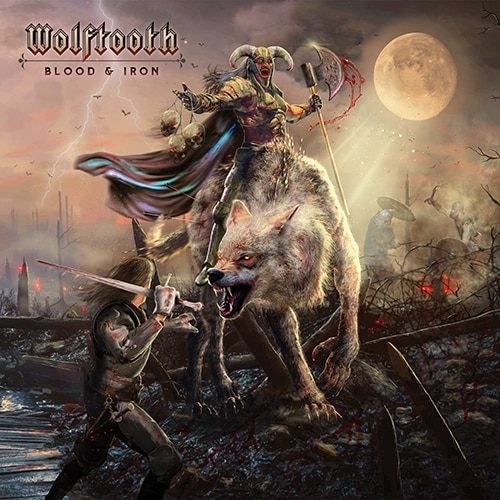 A few weeks back I got to interview Chris Sullivan, lead singer, and guitarist of the Richmond, Indiana band Wolftooth. I didn’t know what to expect, I had been turned on to the band by their label, Napalm Records who had been sending me their videos to promote the upcoming release of Iron & Blood.

To prepare myself for the interview, I asked the label to provide me with a copy of Iron & Blood. The album is solid top to bottom, although the nine tracks range between four and a little over seven minutes long, the album is done before you know it.

To me, that’s a good thing. If an album flows so well, and just flat out entertains you, it doesn’t feel like a chore to listen to. You get lost in the music. And, it feels like the album only lasted a few minutes, instead of it being close to an hour.

The band is labeled a doom metal band, but this album offers straight-up classic heavy metal, stoner influences, some thrashiness, and yes, aspects of doom metal.

I would recommend this album to anyone that’s into bands like High On Fire, Mastodon, or someone that’s looking for something more classic, in the vein of Witchfinder General or any of the NWOBHM bands of that era.

Here is Wolftooth with "Ahab":

Check out Blood & Iron by Wolfblood

Check out the album before picking it up on Spotify or Apple Music. You can also pick it up directly from Frontiers, or from my Amazon Affiliates links below.

Volbeat – Servant Of The Mind

The Browning – End Of Existence

Ice Nine Kills – Every Trick In The Book